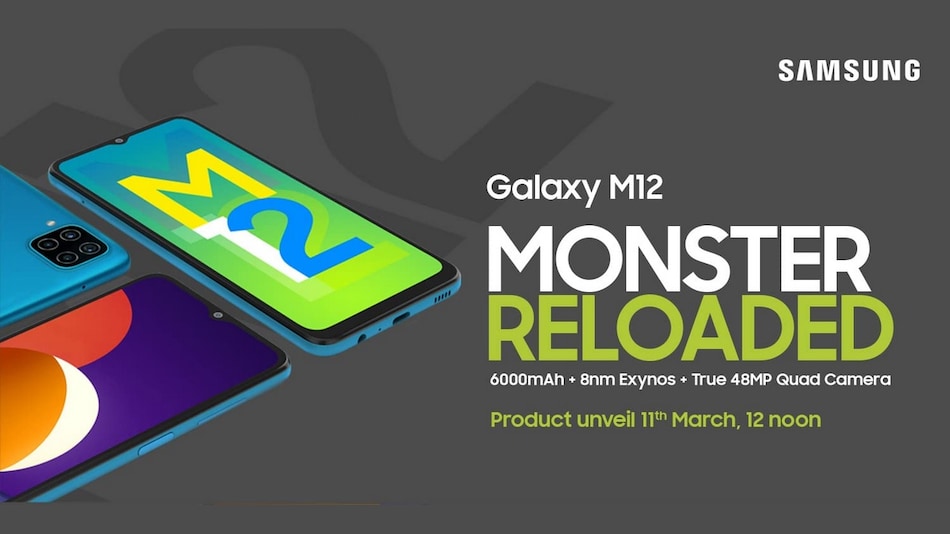 Samsung Galaxy M12 will be powered by an 8nm Exynos SoC which is believed to be the Exynos 850.

Samsung Galaxy M12 will launch in India on March 11 at 12pm (noon), a dedicated Amazon page has revealed. The Galaxy M12 debuted in Vietnam in February, so the specifications aren't a mystery. The Amazon page itself reveals some of the specifications like a 6,000mAh battery, an Exynos SoC, and a quad rear camera setup. The design for the Galaxy M12 can also be seen and it will come with a notch for the selfie camera. Additionally, the phone will feature a 90Hz refresh rate display.

Samsung Galaxy M12 specifications
The Amazon India page reveals the Galaxy M12 will feature a 90Hz refresh rate display that has a notch for the selfie camera. The phone has a massive 6,000mAh battery and a quad rear camera setup that is headlined by a 48-megapixel sensor. The Galaxy M12 will be powered by the 8nm Exynos SoC. A USB Type-C port, 3.5mm headphone jack, and a side mounted fingerprint scanner can be seen as well.

The Vietnam launch reveals the rest of the specifications for the Samsung Galaxy M12 and the phone will feature a 6.5-inch HD+ (720x1,600 pixels) TFT Infinity-V Display with a 20:9 aspect ratio. It could be powered by the Exynos 850 SoC and come with 3GB, 4GB, and 6GB RAM options. In terms of optics, the Galaxy M12 features a 48-megapixel primary sensor with an f/2.0 lens, a 5-megapixel secondary sensor with an ultra-wide-angle f/2.2 lens, a 2-megapixel macro shooter, and a 2-megapixel depth sensor. There is also an 8-megapixel selfie shooter at the front with f/2.2 aperture.

The phone launched in Vietnam with 32GB, 64GB, and 128GB of onboard storage that is expandable via microSD card (up to 1TB). There might be some changes in configuration for the Indian model. Connectivity options on the Samsung Galaxy M12 will include 4G LTE, Wi-Fi 802.11 b/g/n, Bluetooth v5.0, GPS/ A-GPS, along with the aforementioned USB Type-C port and 3.5mm headphone jack. Lastly, the phone measures 164.0x75.9x9.7mm and weighs 221 grams.