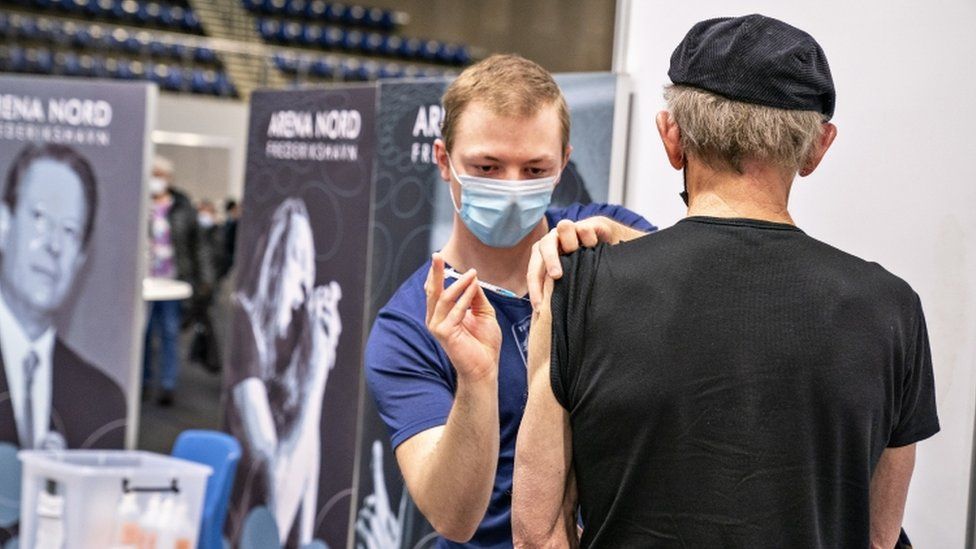 Denmark has ceased giving the Oxford-AstraZeneca Covid vaccine amid concerns about rare cases of blood clots, the first European country to do so fully.

The move is expected to delay the country's vaccination programme by several weeks.

Drug watchdog the European Medicines Agency last week announced a possible link with clots but said the risk of dying of Covid-19 was much greater.

Most have now resumed vaccinations with AstraZeneca, but often with limits to older age groups.

For both AstraZeneca and Johnson & Johnson, the blood clot side effects are extremely rare.

Blood clot is 'very rare AstraZeneca side effect'
What you need to know about vaccine safety
The EU's vaccine roll-out has been criticised by the World Health Organization (WHO) for being too slow, and there are concerns this latest delay could throw it into further turmoil.

Both vaccines work by a similar method, known as adenoviral vectors.

Why is Denmark stopping the AZ vaccine?
Danish officials said that all 2.4 million doses of the AstraZeneca vaccine would be withdrawn until further notice.

The Danish Health Authority said studies had shown a higher than expected frequency of blood clots following doses, affecting about one in 40,000 people.

It comes after two cases of thrombosis in Denmark were linked to vaccinations, AFP reported. One of the cases, in a 60-year-old woman, was fatal.

Director General Soren Brostrom said it had been a "difficult decision" but Denmark had other vaccines available and the epidemic there was currently under control.

"The upcoming target groups for vaccination are less likely to become severely ill from Covid-19," he said. "We must weigh this against the fact that we now have a known risk of severe adverse effects from vaccination with AstraZeneca, even if the risk in absolute terms is slight."

However, the authority said it could not rule out using it again at another time.

During the press conference the head of Denmark's Medicines Agency, Tanja Erichsen, fainted and was taken to hospital as a precaution. The agency later tweeted that she had recovered. slotpg
Haut
Répondre
1 message • Page 1 sur 1