Is the world's vaccine powerhouse running out of doses?

Is the world's vaccine powerhouse running out of doses? 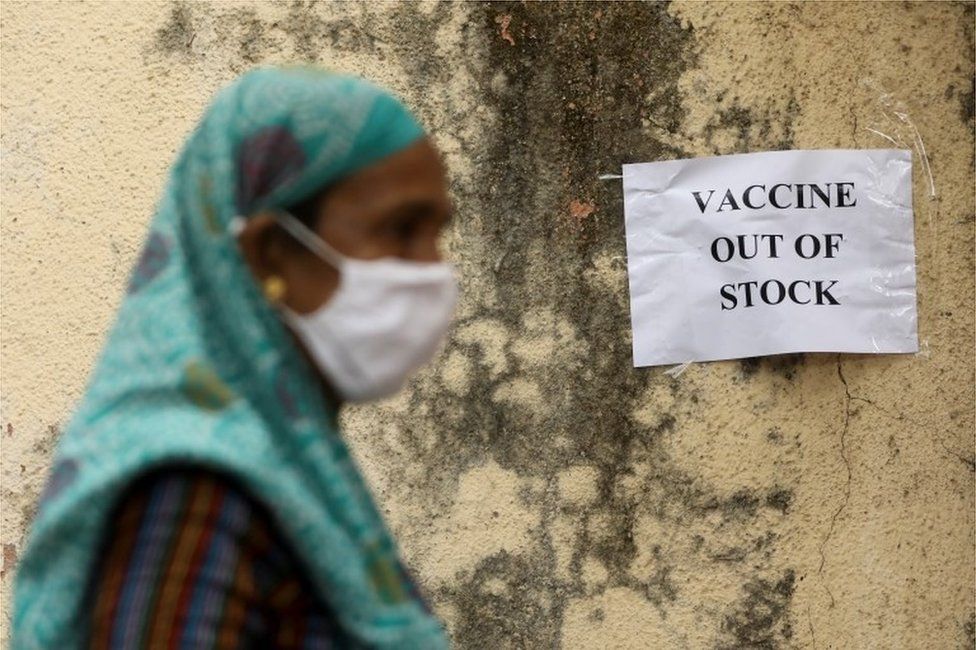 For the past two days, Sanjay Kumar has been trying to get himself and his ageing mother vaccinated against coronavirus in the northern Indian state of Uttar Pradesh.

"I called up three private hospitals in my neighbourhood and all of them said they had run out of doses," says Dr Kumar, a social scientist, who lives in Ghaziabad, on the outskirts of Delhi.

One of them is a 50-bed neighbourhood hospital. "We have zero stock of vaccines and are not taking bookings because people come for jabs and get into fights (when we tell them we have no stocks)," a front office worker said. At another hospital where Dr Kumar unsuccessfully sought a booking, officials said they had run out of doses on Wednesday evening. "We have no other option but to turn people away," an employee said.

India vaccination nears 100 million doses
As India grapples with a deadly second wave of Covid-19 infections - with an average of more than 90,000 cases daily from 1 April - its vaccination drive appears to be struggling. Half a dozen states are reporting a shortage of doses even as the federal government insists that there's enough in stock.

In the western state of Maharashtra, which is reporting more than half of India's new infections, the inoculation programme appears to be grinding to a halt. The local government says its current stock of 1.5 million doses will last only for three days. Vaccination centres have been shut in the state capital, Mumbai, and parts of Kolhapur, Sangli and Satara districts. "If the vaccines don't come in three days, we will be forced to stop the drive," state Health Minister Rajesh Tope told reporters. pg
Fuseau horaire sur UTC
Page 1 sur 1
Powered by phpBB® Forum Software © phpBB Limited
https://www.phpbb.com/