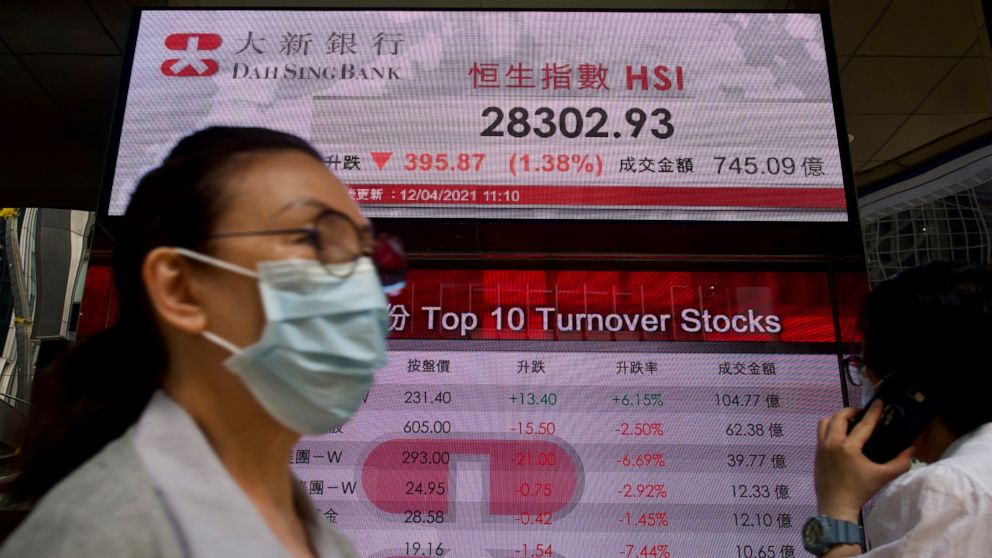 Asian shares were lower on Monday, as investors grew wary over the recent surge in coronavirus cases in many places while vaccination efforts are making scant headway.

A moderation in bond yields has helped restore confidence that the Federal Reserve will move soon to raise interest rates to keep inflation in check as the economy recovers from the shocks of the pandemic.

But in Asia a resurgence of infections is undermining confidence in that trajectory.

China's top disease control official said during the weekend that the effectiveness of Chinese coronavirus vaccines was low and the government is considering mixing them to get a boost. It was a rare admission and comes as the country continues to battle outbreaks of the virus that first was reported in the central Chinese city of Wuhan.

Japan is struggling to get infections under control as it prepares to host the 2020 Tokyo Olympics. Thai health officials are warning the daily rate of new infections could top 28,000 if urgent measures are not taken to counter the country's worst outbreak so far.

“The vaccine rollout remains slow in Asia, but what is more concerning is a renewed divergence in virus caseloads, with second waves taking hold in India, the Philippines and now Thailand,” Stephen Innes of Axi said in a report. That “continues to sully the global travel outlook, "he said.

Shares in South Korea's SK Innovation Co. jumped 14% after it reached a settlement in a trade dispute with rival LG Energy Solution. The companies pledged to work together to strengthen the EV battery supply chain in the U.S., moving ahead with plans to manufacture batteries in Georgia in what President Joe Biden called “a win for American workers and the American auto industry.”
Haut
Répondre
1 message • Page 1 sur 1